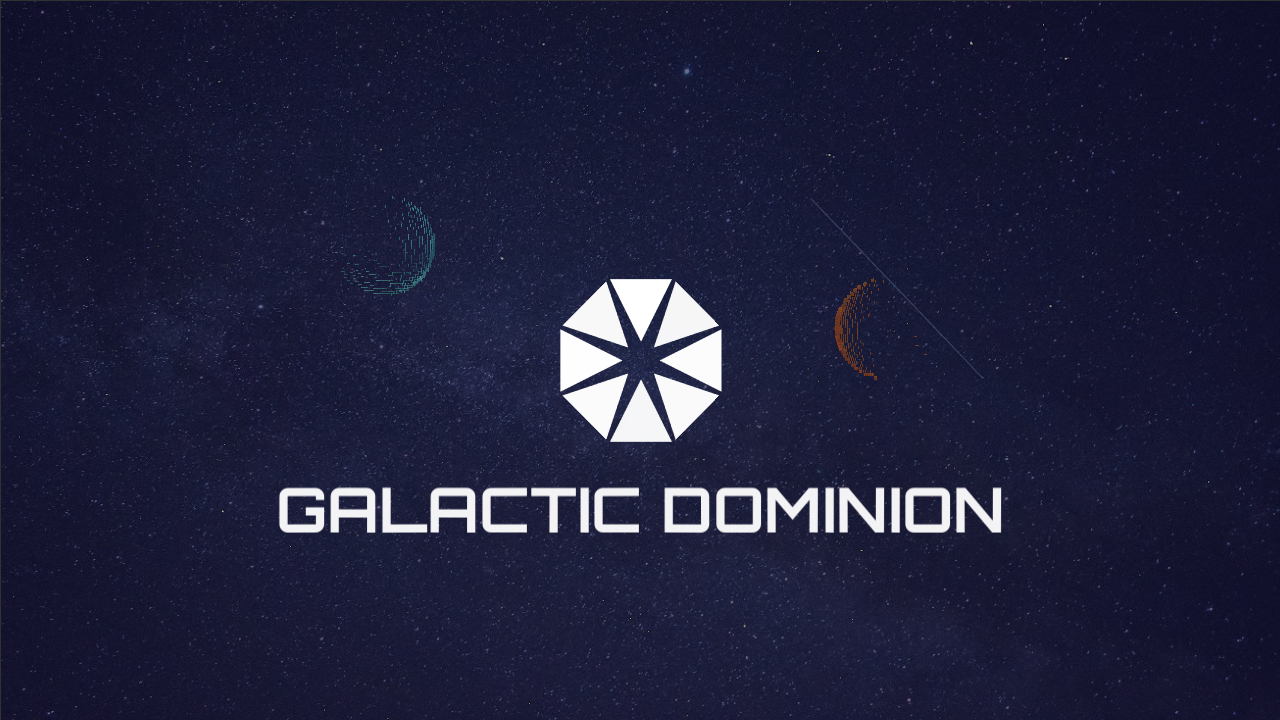 We’ve finally incremented the build to Version 1.1.0 with a brand new Steam logo.

Since 1.0 the game has come a long way and been patched 12 times. I want to take this opportunity to summarize all the changes that has gone in since 1.0.

In celebration of the launch of our first game we’re offering a 15% launch discount on Steam!

Tomorrow, Galactic Dominion will go live!
But before that we will go into a bit more details about a couple more mechnics.

Combat can either take place in space or on the ground so we’ll go into a bit more details here.

Fleets are composed of Ships. And Ships can come in a few types. Colony Ships, Transports, Fighters, Bombers, and Battleships.

Colony Ships and Transports are non-combative and used mainly to colonize and invade enemy Star systems respectively. (More on the invasion further down)

Fighters, Bombers, and Battleships are the main weapons in your Fleet. Each Ship type has it’s strengths and weaknesses.

Fighters – Cost the least, have a boost to movement and fires a laser canon at a high rate. It does however, have lower hit points and are vulnerable to Battleships.

Battleships – Cost a more, moves slower, and are weak against Bombers. But they have high hit points and fires a strong and effect Beam weapon against Fighters.

Bombers – Are designed to Battleships, Star Fortresses, and bombard Planets but they are extremely vulnerable against Fighters so would require an escort. More on Star Fortresses and Bombardment further below.

When a Fleet gets within range of an enemy Fleet, they will automatically open fire. Taking into account each Fleet’s Attack, Defense, and Hit Points. Defense will reduce any Attack before applying the damage to the Hit Points so researching advance technologies (more on this in a bit) will be critical in your Fleet missions. 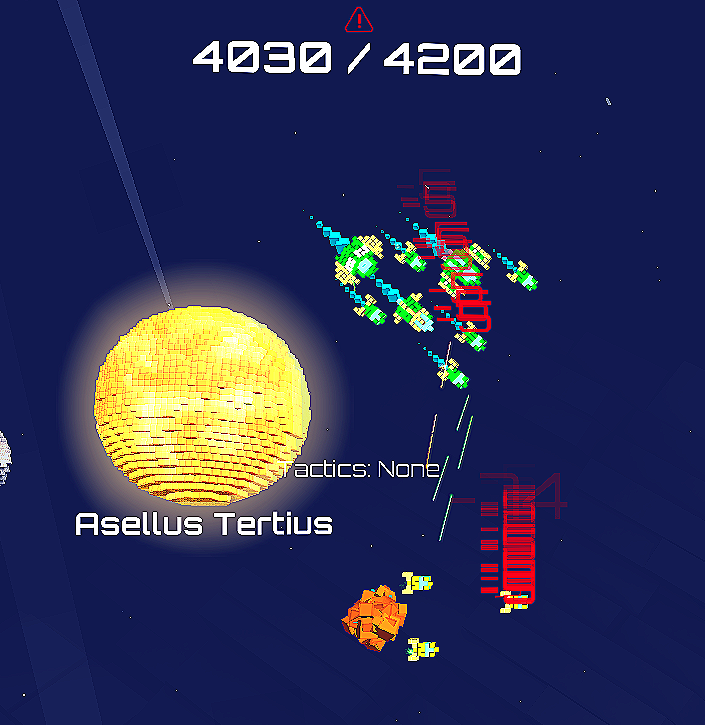 Fleets can be boosted with Tactics once the proper research is completed. These are commands that you can give individual Fleets in order to gain an advantage over the enemy. Alternatively, if you enable your AI Commander they will automatically try to find the best Tactic to use in their given situation.

Here your Fleet takes Attack Mark I, an attack stance that boosts your attack by 1 at a cost of defense.

Star Fortresses are primary used as defensive structures for your Star system. They do not take Command points to build but are limited based on the research level you have unlocked.

They are slow moving, cost a lot, vulnerable to Bombers, and can only orbit the local Star where they were created. But they have very high Hit Points and strong ion Flame attack that can hold off many attacking Fleets.

However, the have a very important quality that makes them important and that is, enemies will not be able to Bombard or Invade the Star system if there are any Star Fortresses in orbit. So they effectively acts as a shield for your system. 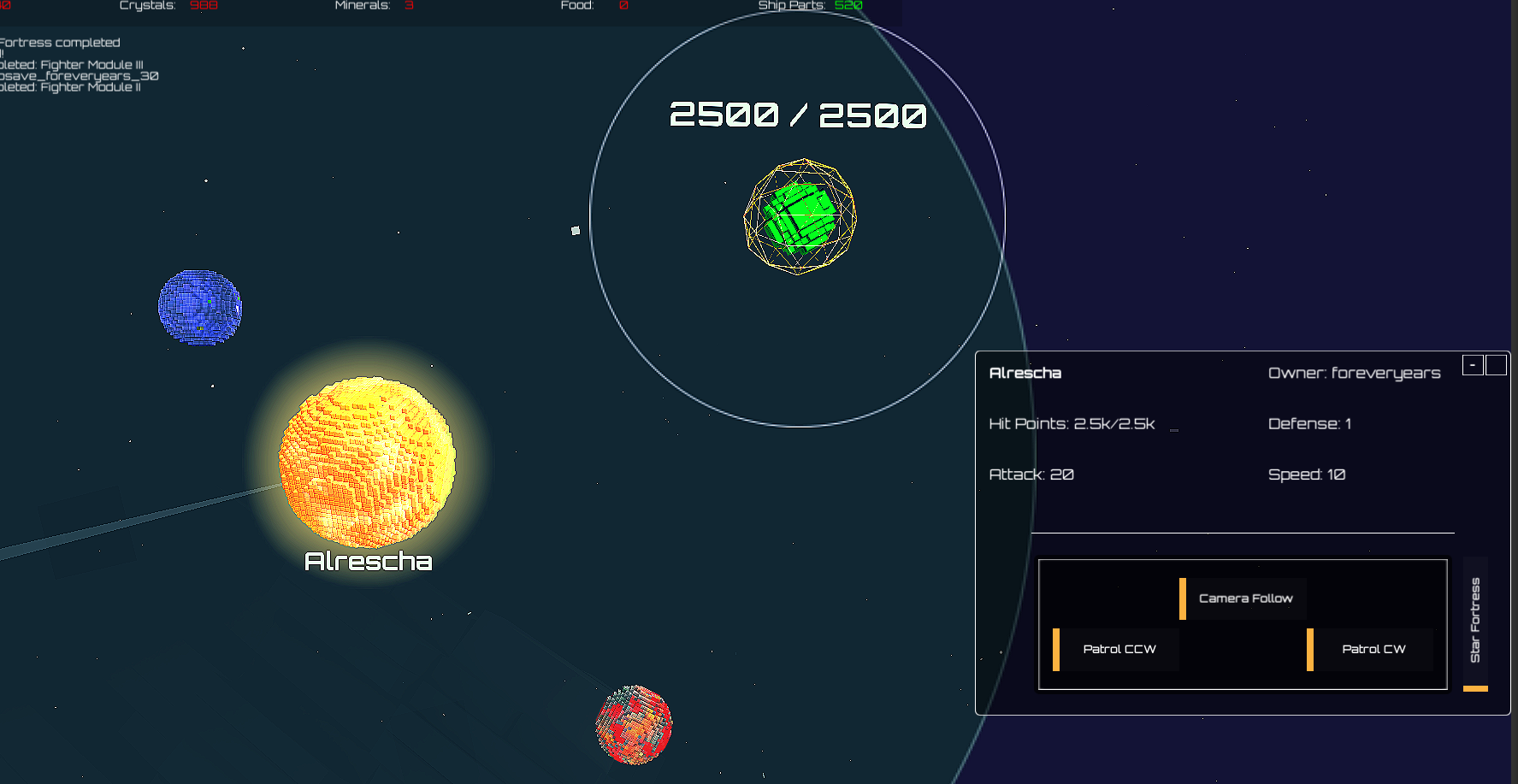 Bombers, as mentioned above, can perform Bombardment actions when they are docked to an enemy Star system and there are no orbiting Star Fortresses.

When bombing begins, you will see the Bombardment overlay appear: 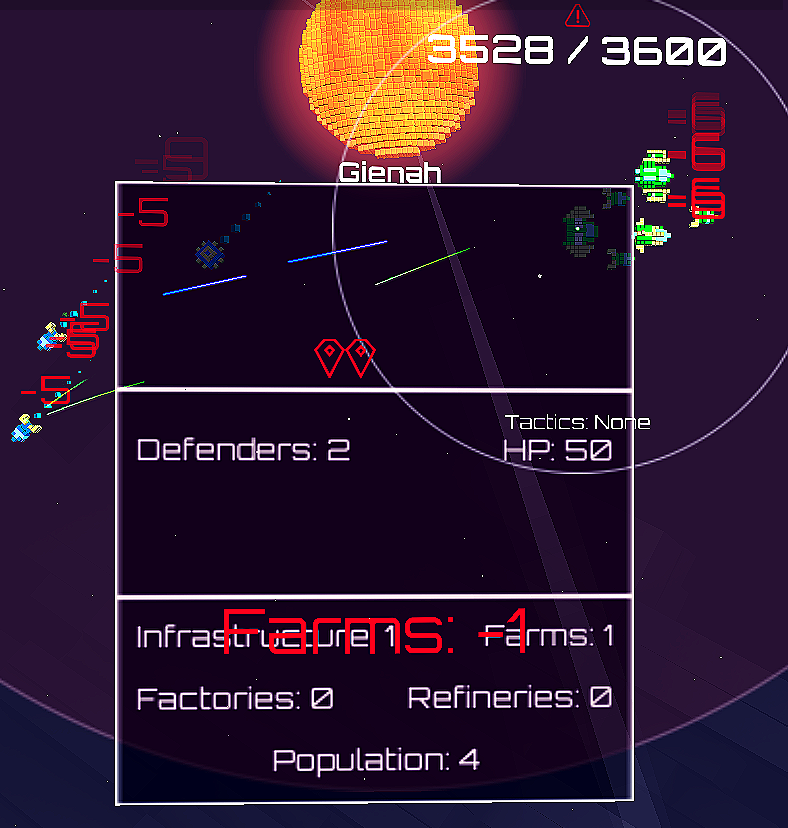 If a Star system loses all its Population (Workers essentially) the system is lost. Bombing may also damage and Industry and kill Troops (represented with the tokens and marked as Defenders.

The more Bombers you stage to perform the Bombardment the more damage system damage you can inflict.

You may also enable the Auto-Bomb feature and the AI Commander will keep bombing the planets until all population is wiped out.

Transport ships can start Ground Invasions on a Star system that has no Star Fortresses defending it.

When a Ground Invasion begins the overlay will appear to show the Defender and Attacker tokens along with the Hit Point of the unit currently in combat.
If the Attacker defeats all the defending Troops of the Defender then they will take over the Star system along with any Industry and Workers still in the Star system. This is a less destructive take over than a complete Bombardment mission. Of course, you may wish to reduce the number of defenders first by doing a bombing run and then sending in a ground invasion afterwards.

Like Ships, the Attack and Defense of ground units can be upgraded through research. 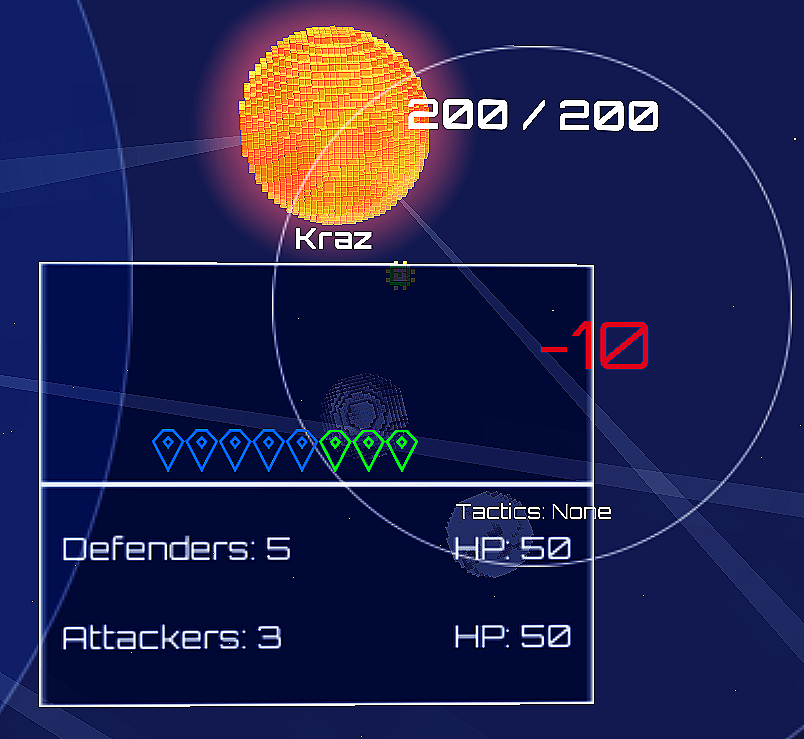 Research is divided into four fields: 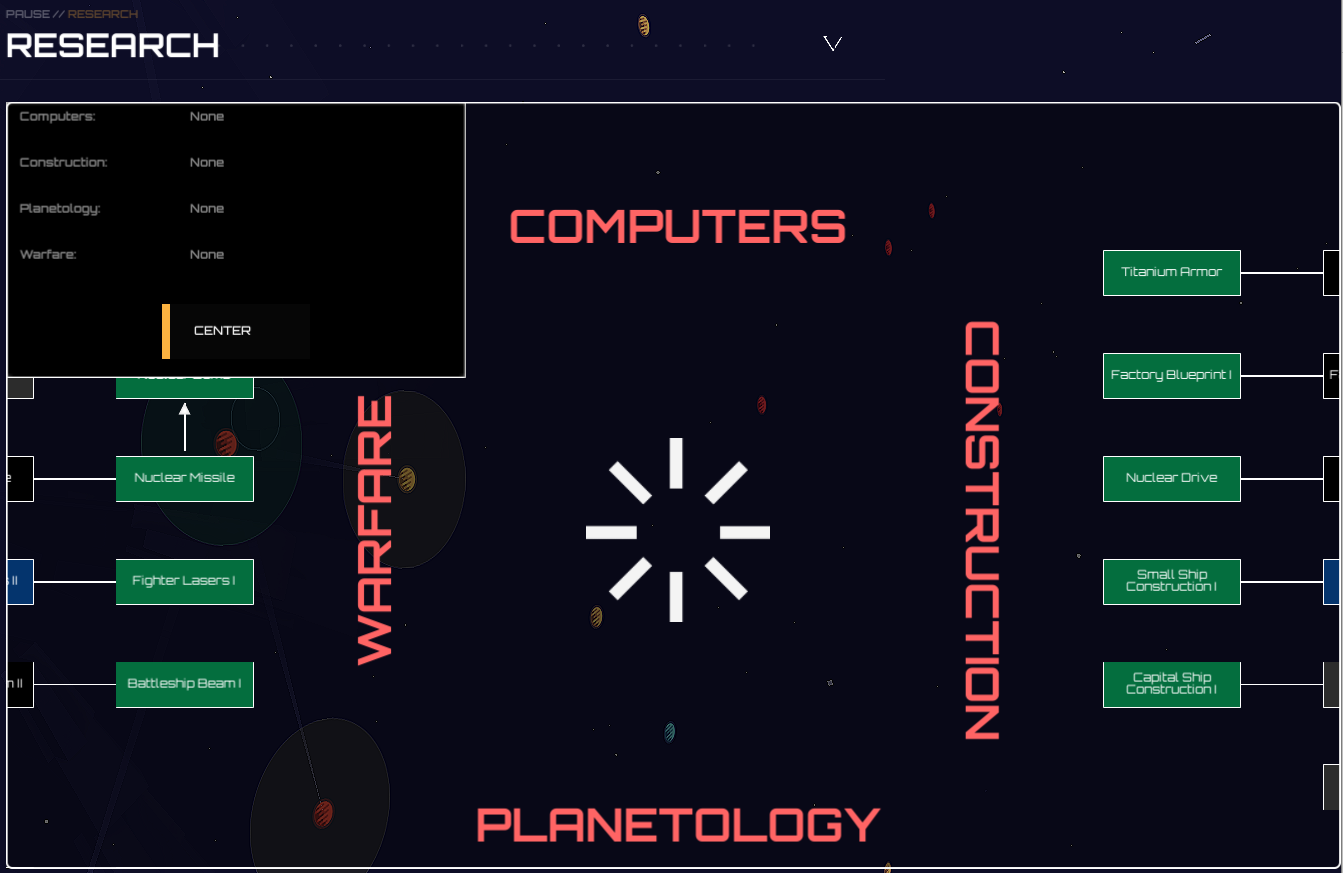 Computers focuses on unlocking the science of robotics and generally allows you to build Ships more effeciently, automated Mineral mining, and control more Factories per worker unit. Scanner technology can also be found in this field.

Warfare focuses on Ship and Ground Attacks, Command point limits (allowing you to build for more Ships), and Fleet Tactics.

As mentioned in the previous entry, you can select a different Research topic per field and they can be researched simultaneously by allocating Scientists to the desired field. 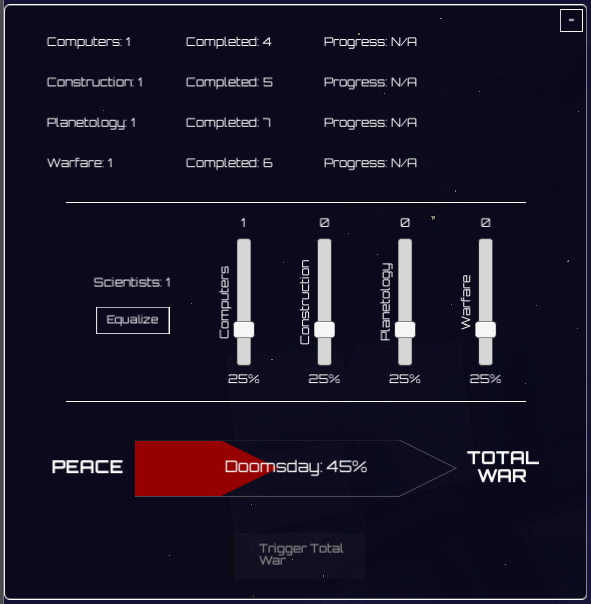 That’s it for now! We hope to see you all in-game tomorrow!

Hope you’re all having a good weekend!

User Experience has always been a challenging area and it’s no different for Galactic Dominion.

There are so many things a player can do in the game we were afraid that it would be too overwhelming when it came to controls. Furthermore, the design goal is to make sure that players experienced a quick-paced action strategy so we wanted to try to keep the player in as few screens as possible.

With that said, a lot of information that had to be cramped into the game scene so we divided it into essentially 2 sections. We will go over them at a high level and revisit them in details in future entries.

On the Galaxy Map, the player can zoom close into the each individual Star systems or far to see most, if not all, of the current galaxy. 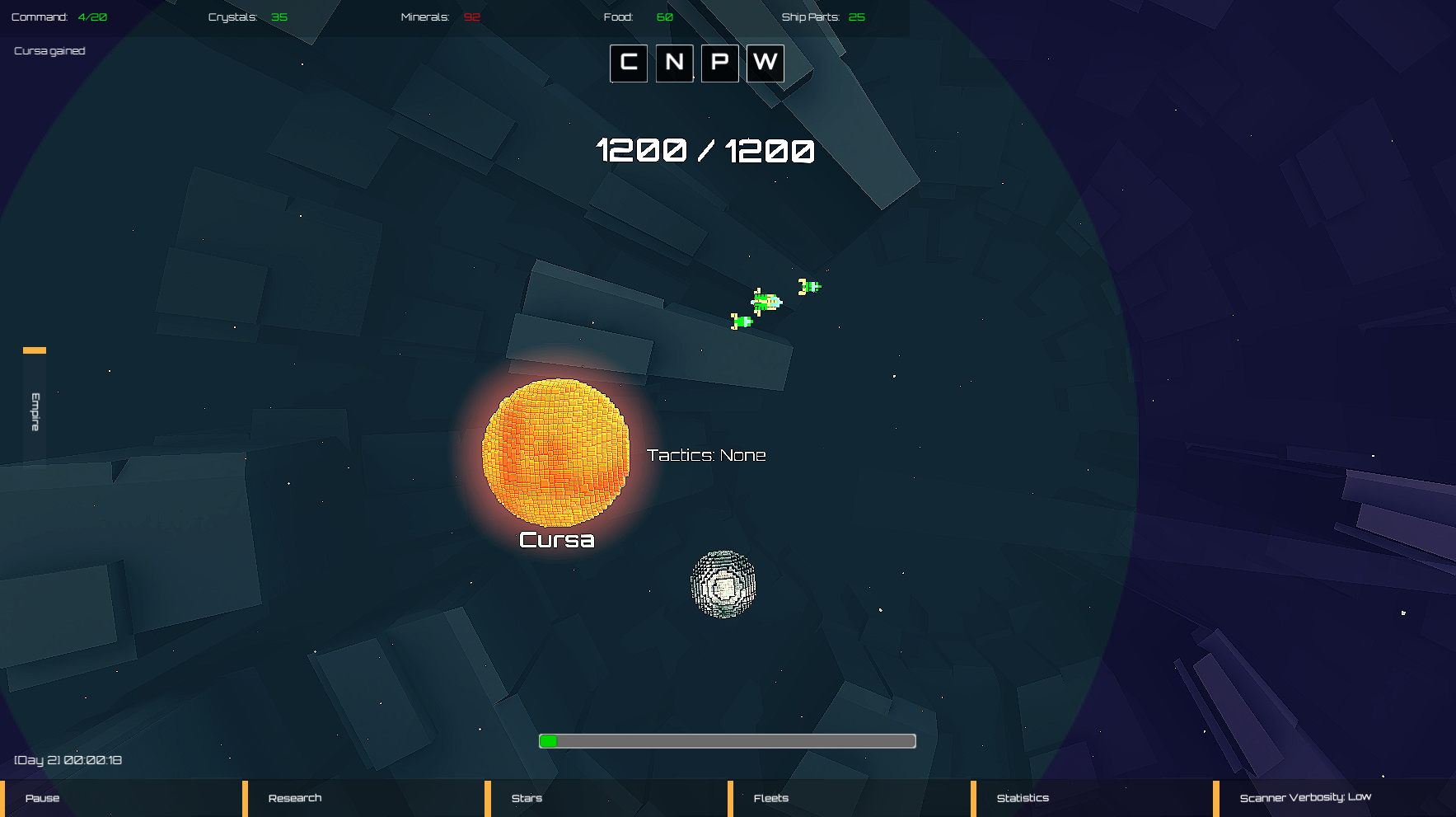 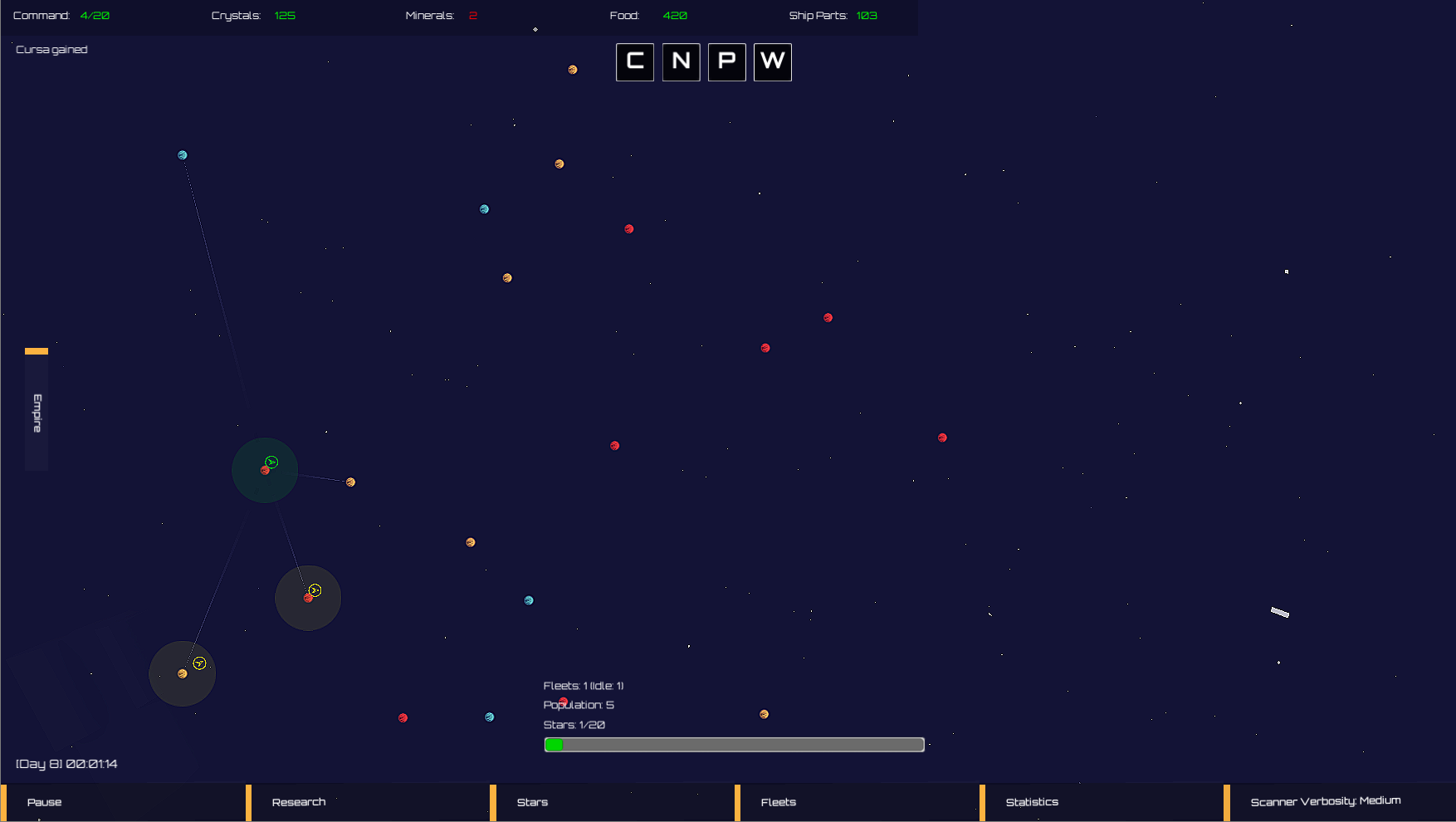 Information can generally be found in Overlays or Tooltips.

Overlays can clutter the game quickly so we provided players an option to toggle the verbosity. It is part of the Scanner system – Think of it as the part of the hyperspace detection system available to the Empires. 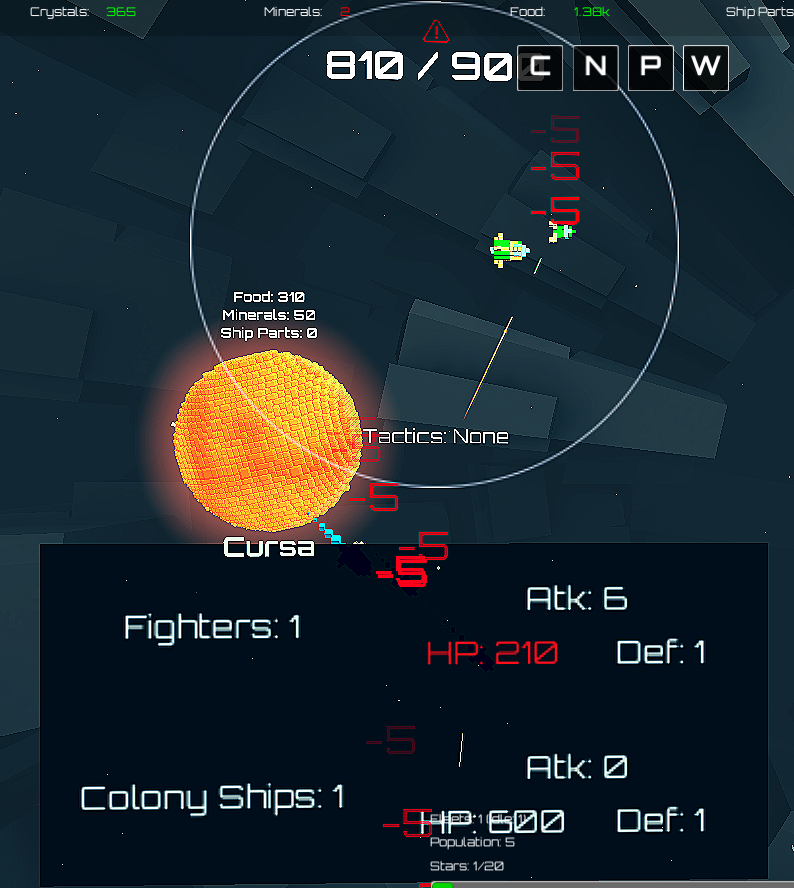 Tooltips on the other hand contain a lot of information without cluttering up the scene as they are only shown when you hover over an element.

There are Tooltips everywhere and contains useful information such as amounts, progress, penalties, bonuses, etc.

Here are a few examples:

Command ToolTip shown when hovering over the Empire’s Command resource: 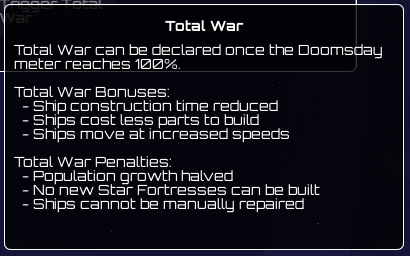 FoodToolTip shown when hovering over a Star’s Food resource: 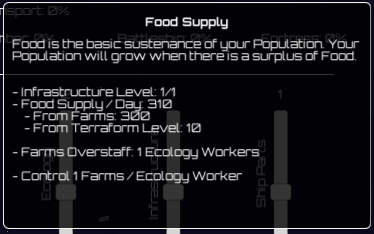 This Control is always available and can be shown or hidden by clicking the Empire button on the side of the Galaxy Map. 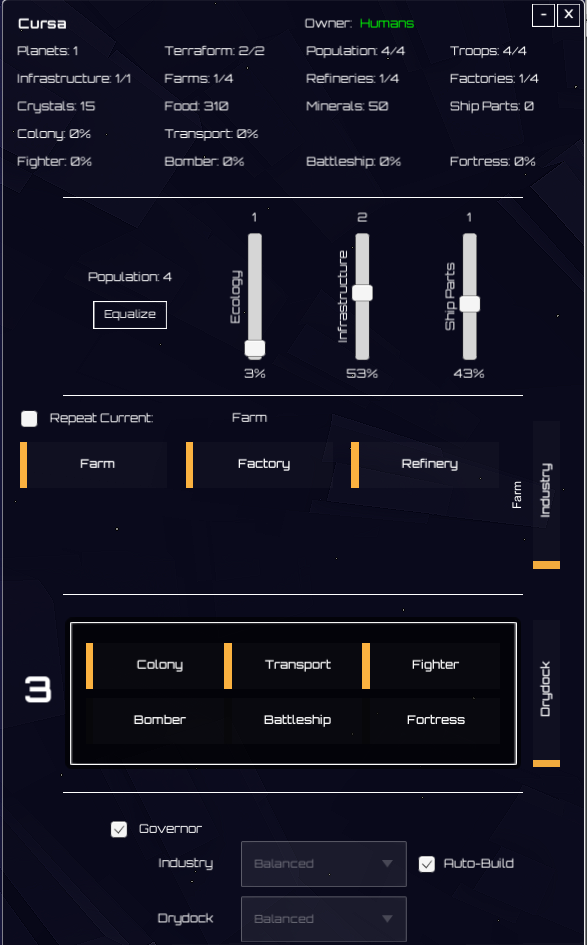 This Control is available when you click on a Fleet you own. Like the Star Control, if you click on an enemy Fleet you will not be able to see details until you have the proper Scanner technologies. 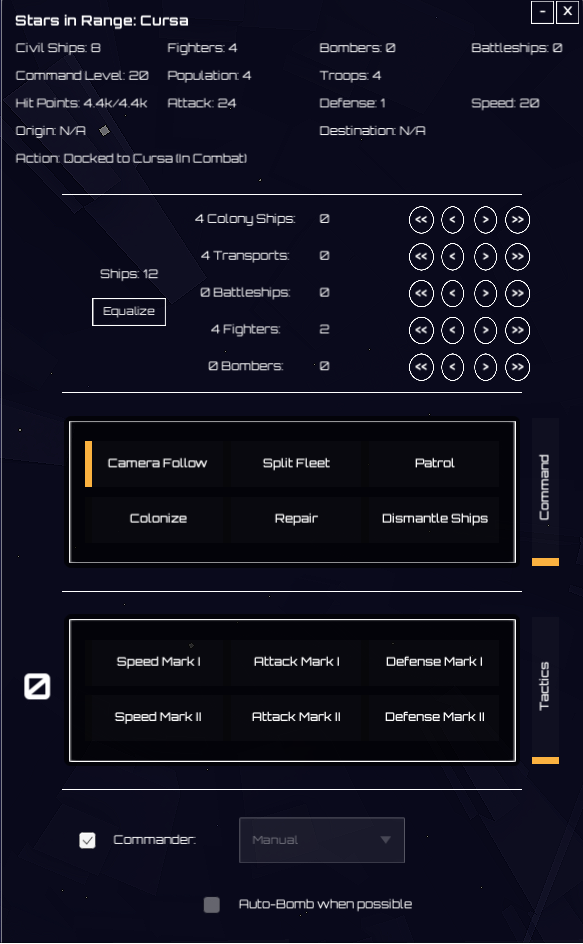 All the Controls have in-depth Tooltips so if you hover over an element there will be additional information.

There are a couple more minor Controls (Star Fortress Control and the Multi-Selection Control) we will not cover today as they are quite small in comparison.

The Pause Menu contains a number of sub-menus but we will focus on the 4 that may be used to manage your Empire.

Because of their important they can also be accessed immediately from the bottom HUD on the Galaxy Map:

The Research Menu allows you to select the topics to research. You may research up to 4 topics simultaneously, one for each Field.

You will find the Research Tree here and clicking on them will show you the costs and description of the topic. (You can also hover over them for a Tooltip description)

The Stars Menu lists all the Star systems that you have discovered so far. From here you can manage all of your systems, giving you all the same access as the Star Control.

Furthermore, you can run filters and sorts to organize the list and then zoom to the Star with the Focus button. 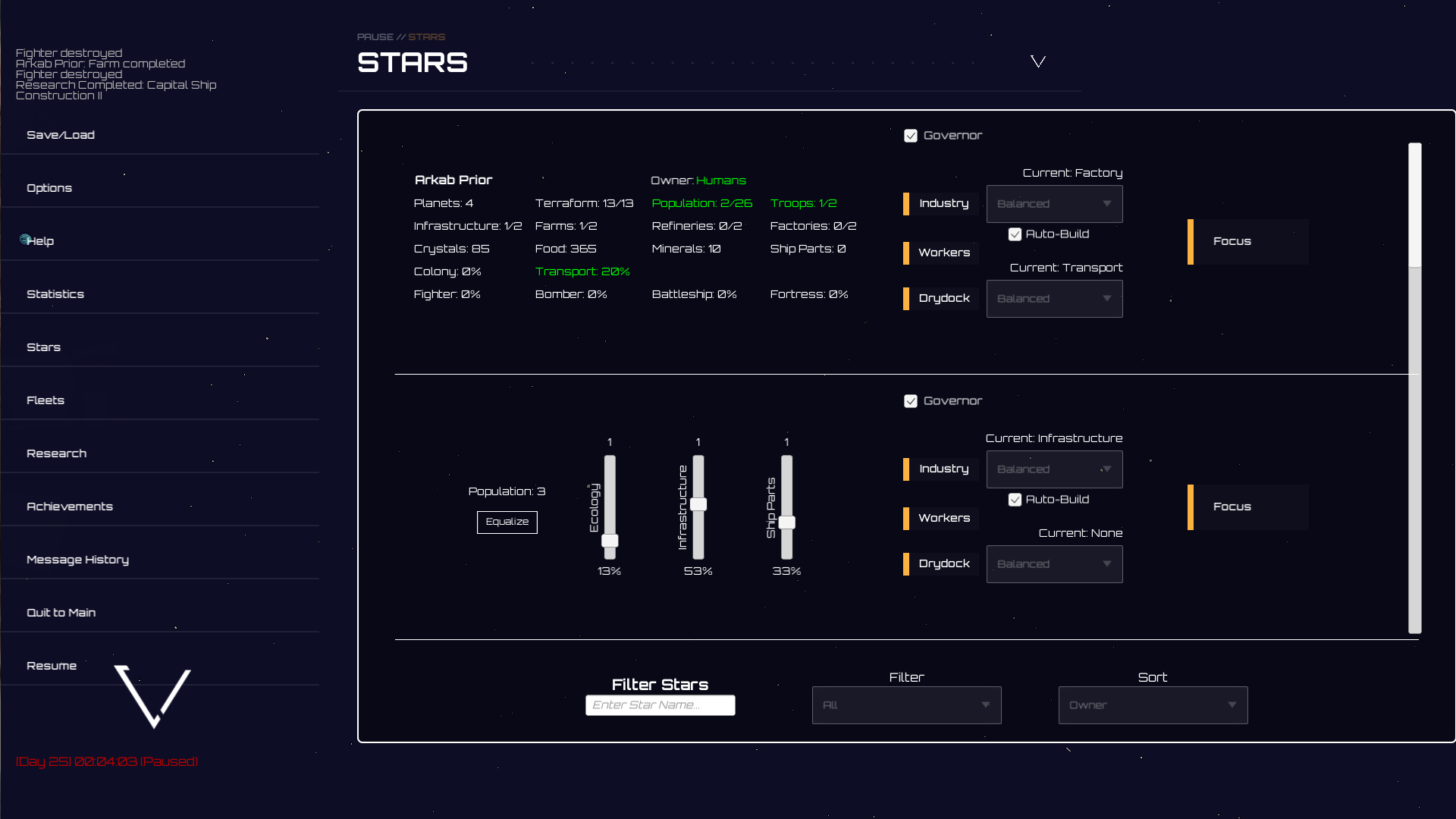 Likewise, the Fleets Menu lists all the Fleets that you own and you can track and manage them directly from this menu. 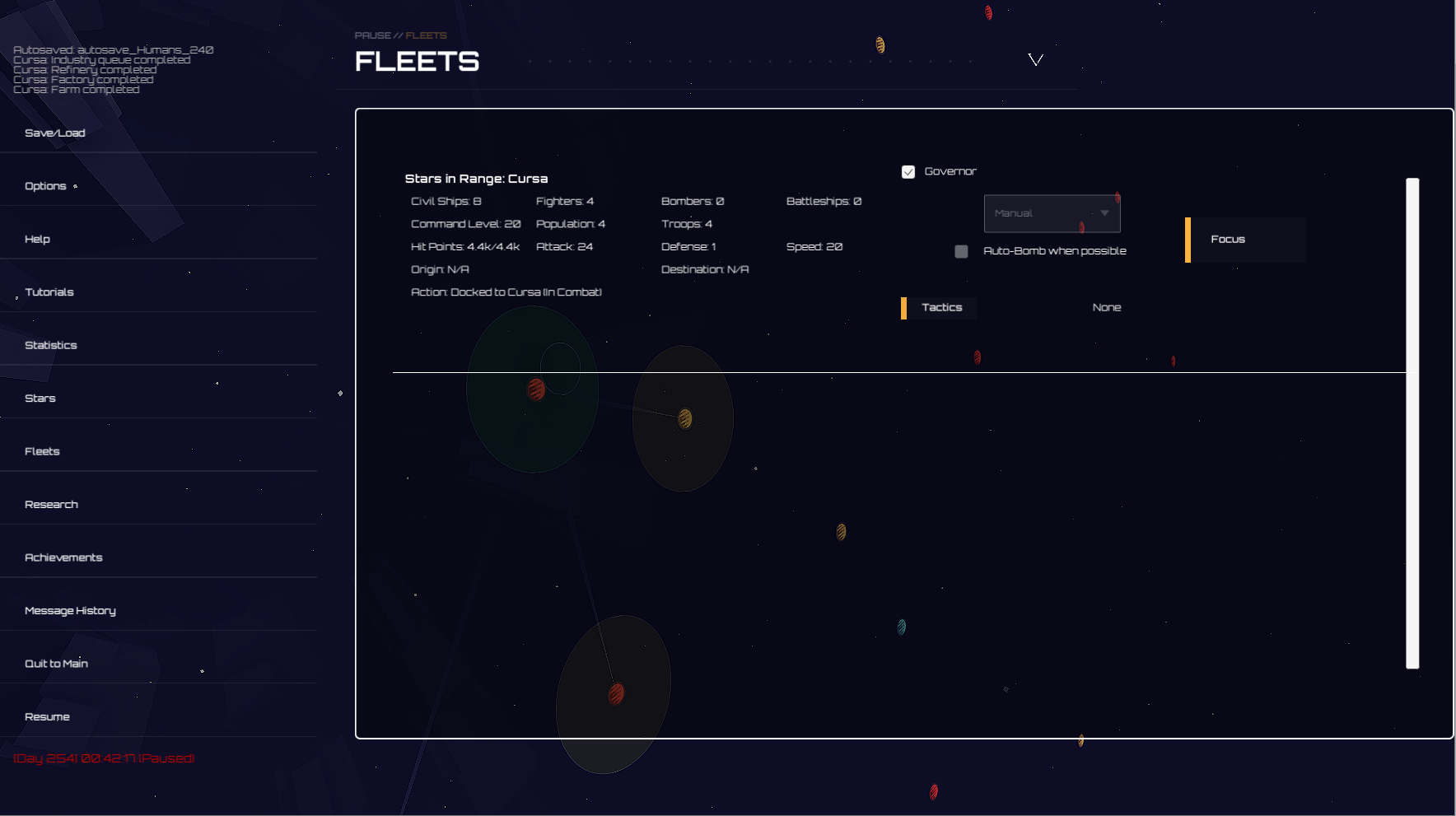 The Statistics Menu contains a trove of information regarding the progression of your empire.

Once you unlock the appropriate Scanner technology you will also be able to see the statistics of your enemies. 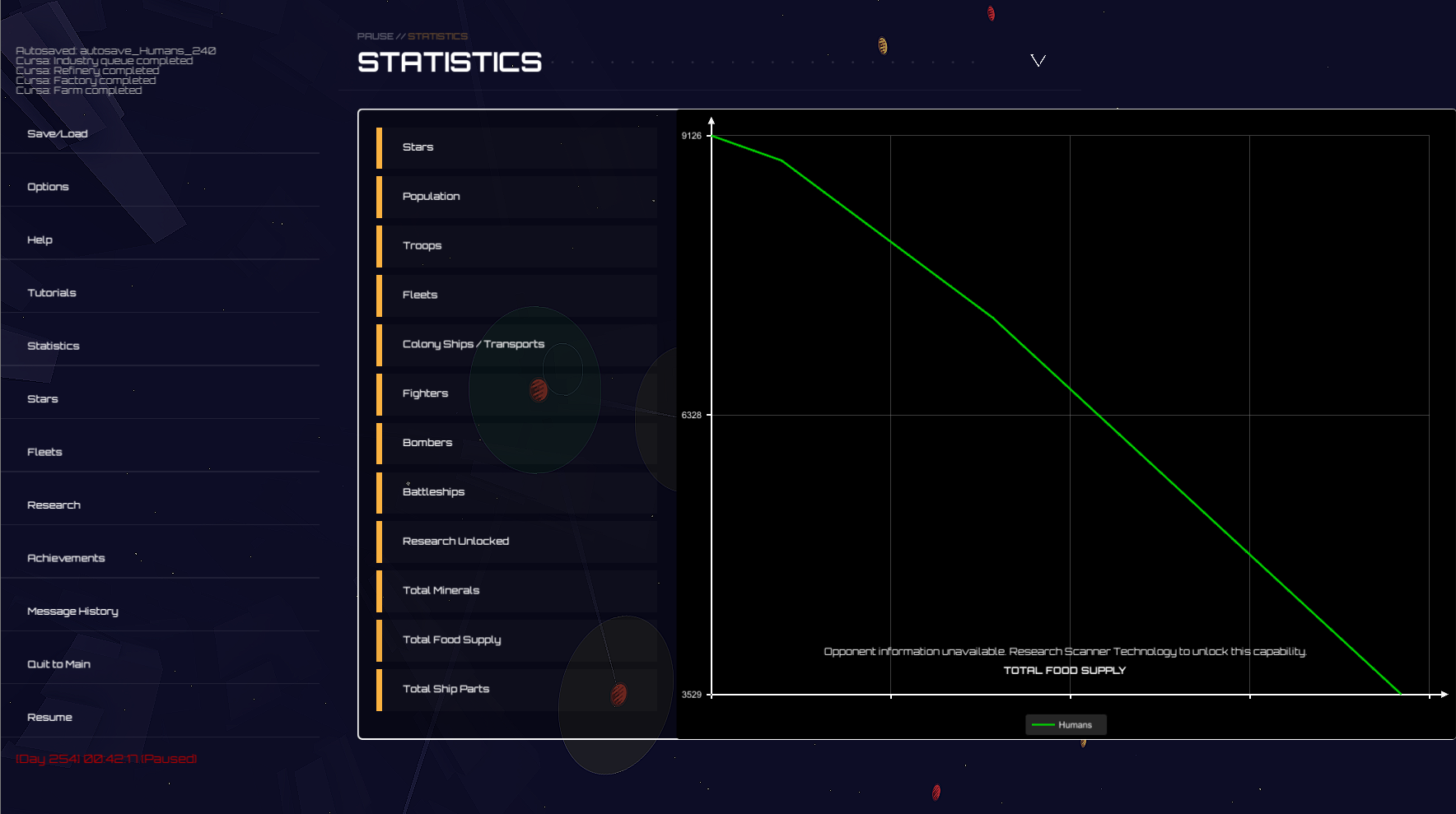 We also wanted to announce that after some preliminary playtests we thought that it was important to include a user manual as a well as a Tutorial section for our players.

We’re happy to present to you here the Tutorials Menu we put together this weekend along with our user manual and short video clips on how to perform specific actions in game. 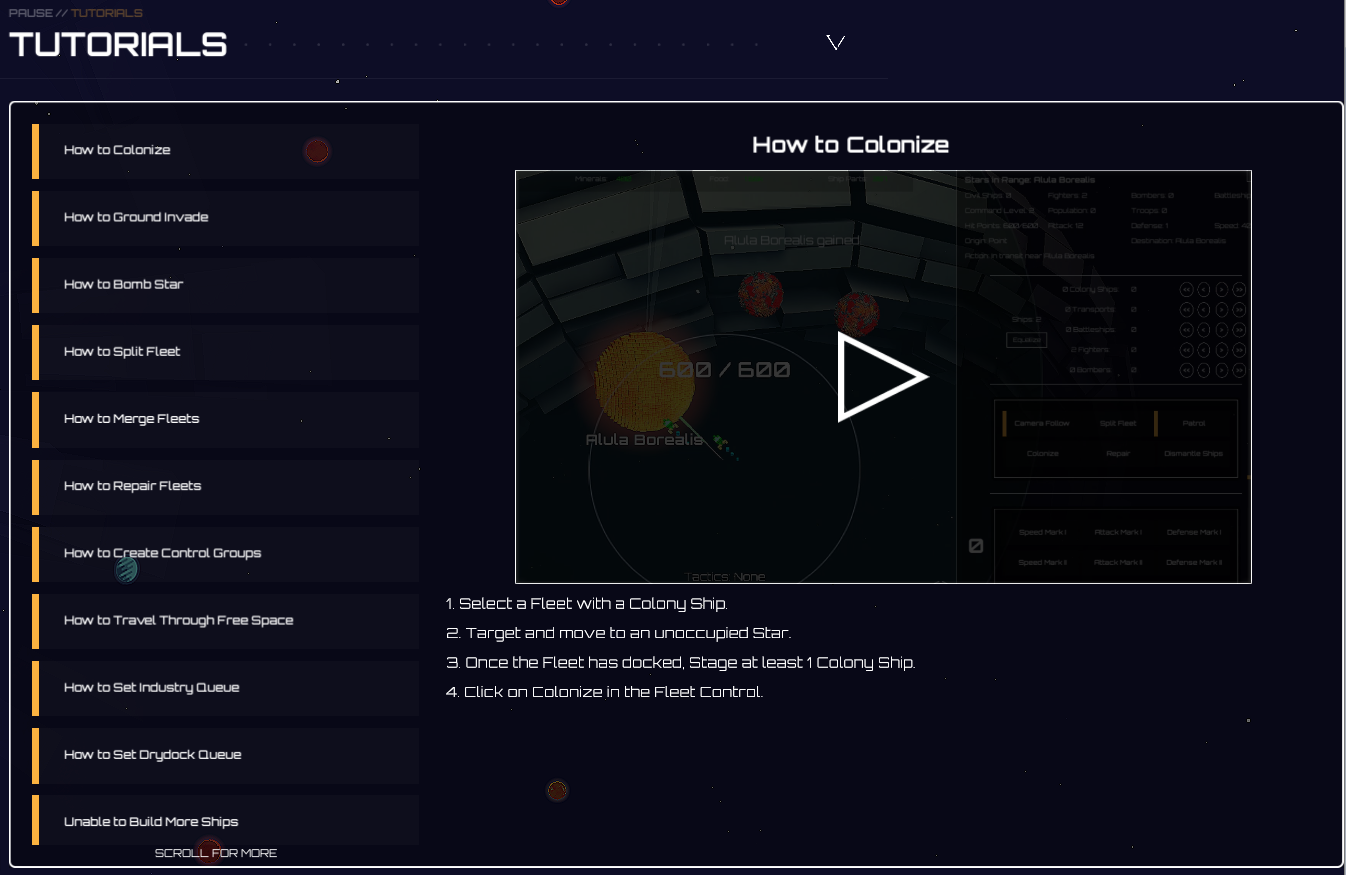 For those curious about the user manual. It will be available in PDF format and shipped with the game but you can also access it on our website here:
Galactic Dominion Manual

That’s it for now. It was a high level overview of the User Interface and Controls but we’ll go over them in more details in the future.

Next time we’ll go over Research in more details and get ready for the launch of the game!